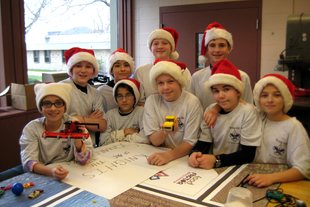 December 17 , 2011
Troop 333, formed in September 2011 and based at Cathedral Camp in Lakeville, is celebrated many firsts the week leading into Christmas including a first place finish against a field of twenty-one teams from the region in the FIRST LEGO League Robotics Scrimmage. The Knights of the Square Table team, sponsored by Troop 333, attended their very first event on December 17 at Roger Williams University. 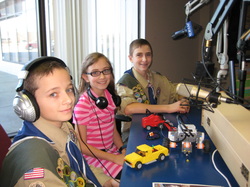 Daniel, Rachel and Anthony Perry were on-air guests on the Morning Show at WBSM 1420 AM Talk Radio on January 27. Host Phil Paleologos dedicated an entire one-hour segment to the Perry children, all members of the Troop 333 Robotics Team.
They discussed the idea that it "isn't your grandfather's Scouting anymore" with other topics such as new Scouting Merit Badges for Robotics, Space Exploration and Nuclear Science. 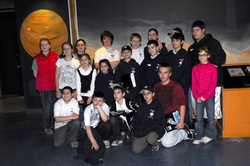 February 5 and 6, 2012
The Troop, with brothers, sisters and friends, traveled  to the Bridgeport, Connecticut Discovery Museum and Planetarium where they participated in numerous science based, fun activites.

This included a full simluation of a space mission to land a base on the Moon, launching home-made rockets into the cold Connecicut winter skies outside the Center and completing work on their Astronomy and Space Exploration Merit Badges.
CONTACT WEBMEISTERS